The progress is constantly speeding up and the future is at our door — it is something that everyone keeps repeating even not thinking much of this future. But if you start thinking, you find evidence to this in every tool, in every method and technique present in all spheres of life.

We are only beginning to get used to the Internet of Things and the idea of the connected world; scientists sketch new applications and scholars write books on its impact on our mentality. But the IoT is already not the cutting-edge technology; the progress has already digested it and is promising to add tactile senses to our internet experience in the Tactile Internet paradigm.

The Tactile Internet has been defined by the International Telecommunication Union in August 2014 as an Internet network featuring low latency, an extremely short transit, a high availability, high reliability and a high level of security. This technology rests on cloud computing proximity (Mobile Edge-Cloud) and the virtual or augmented reality for sensory and haptic controls. It is believed to add a new dimension to human-machine interaction by delivering a low latency enough to build real-time interactive systems.

The new technology has been designed to operate in haptic virtual environment at the range of almost 150 km in less than a millisecond. Such fast response time of the transactions has additional benefit of increasing security. Authentication is provided by the associated physical transmission and the use of biometrics tactile systems called the “non-clonable physical functions.”

Foreseeing the possibilities of future advancements in 2012, Gerhard Fettweis, a mobile communications professor at TU Dresden, coined the term Tactile Internet and set the process running.

“This way you could, for example, catch a falling object remotely, or control a connected car at an intersection. If you provide haptic feedback, you can also feel a reaction such that it seems to be instantaneous. The Tactile Internet will be used in areas such as automation, education, entertainment, gaming, farming, healthcare, and industrial transportation. It will also enable humans to control robots remotely in real time,” he pictured the future of his creation.

As we can see from the creator’s comment, the two main goals of the Tactile Internet are Fettweis’s comment: to deliver “haptic feedback,” or touch , in real time; and to create networked control systems that could work in an intertwined and immediate way to enable automation or remote control of highly dynamic processes.

In the most general terms, the Tactile Internet aims at enabling interaction with distant humans and cyber-physical systems as if they were close. As it can maintain the reaction time of the order of the millisecond, the Tactile Internet may be beneficial for areas such as industrial automation, transportation systems, health, education and serious games. Thanks to its characteristics, the potential applications of the Tactile Internet include:

The end-to-end architecture for the Tactile Internet can be split into three distinct domains: a master domain, a network domain, and a controlled domain.

Master Domain — usually consists of a human (operator) and a human system interface (HSI). The HSI shall be actually a haptic device (master robot), which converts the human input to tactile input through various tactile coding techniques. The haptic device will allow an operator to touch, feel, and manipulate objects in real and virtual environments, and primarily controls the operations.

Controlled Domain — consists of a teleoperator (controlled robot) and is directly controlled by the master domain through various command signals. The teleoperator interacts with objects in the remote environment. Energy is exchanged between the master and controlled domains through command and feedback signals, thereby closing a global control loop.

For the Tactile Internet that will be servicing such critical aspects of society as healthcare, security becomes the top priority. With such applications as telesurgery, the outage should not increase a second per year. Besides, it should have sufﬁcient capacity to allow large numbers of devices to communicate with each other simultaneously and autonomously. It should be able to work with the traditional wired Internet, the mobile Internet and the IoT. The current 4G communications systems cannot fulfill these technical requirements, so it is the 5G mobile communications systems that are expected to underpin the Tactile Internet. 5G is still at the stage of design, though common understanding exists that it should not only support an evolution of traditional mobile communication services, such as personal mobile multimedia communication or personal mobile broad-band services but also address novel use cases, including, for example, machine type communication (smart energy networks, vehicular communication and intelligent transport systems, sensor net-working) or novel ways of media distribution.

A logical approach to the 5G network architecture builds on a common programmable physical infrastructure and an NFV-enabled network cloud that provides the required protocol stack functionalities. The SDN controller provides the functionality of programming the core and radio-access network.

In the Tactile Internet, the cloud technology is natively embedded into the networking technologies. With cloud computing and storage, resources are not only shared by multiple users but also dynamically reallocated per demand that maximizes computing capabilities and minimizes power consumption, rack space, software licenses, among others.

The distance from the cloud to the wireless edge can maximum be in the order of a few kilometers so that the 1ms challenge can be met. This requires the cloud application server to be hosted at the edge of the operator’s core network. In this way, the applications are stored and executed in a very trusted and secure environment. However, scalability and delay if the server is placed deep into the CN become an issue and so is delay if the server is placed deep into the CN. To minimize this issue, it is proposed to use Cloudlets where fairly distributed cloud storage and computing capabilities are placed at the very edge of the network. Separation in functionality is ensured via different virtualization approaches. The cloud community, however, has been pushing the edge-cloud concept even further through the Fog Computing and Nebula paradigms — a dispersed cloud infrastructure that uses (voluntary) edge resources for both computation and data storage.

So, the IoT era has brought us many great things, but it is time to go beyond to improve human presence in an interactive future with robotics and remote technology. The Tactile Internet will become the technology of the future that will finally transport touch in real-time through the Internet. Maybe, this will be the technology that will promote interaction rather than automation, giving a more human side to tech as well as our communication via the Internet.

Max Ved, a Scientist Entrepreneur, is Co-Founder & CTO at SciForce, an IT company specialized in the development of software solutions.

Max Ved, a Scientist Entrepreneur, is Co-Founder & CTO at SciForce, an IT company specialized in the development of software solutions. 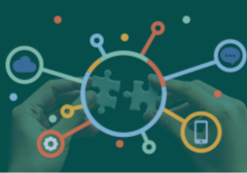