Processing IoT data at the edge is a must for businesses. But, both IoT security and edge security are serious concerns for the adopters

IoT and edge security is a business concern.

IoT adopters, quite rightly, have serious concerns about the security of the IoT devices and networks that they deploy. Why? Because security is yet to be built into the design phase of these devices; they are inherently insecure — and future manufacturers must respond to this. Research carried out by the IMC, (the International IoT M2M council) and commissioned by Pod Group confirms this.

It also found a demand for dedicated IoT security solutions for IoT devices already in the market. As edge computing begins to come into play as well, edge security must be considered.

Anna Stergioula, head of security at Pod Group, commented: “As more companies move towards digital transformation and embrace IoT and the applications it enables, growth rates of IoT adoption look set to spiral. With this marked growth comes a number of challenges and risks. According to the latest report by Subex, a leading software and security solutions provider, cyber-attacks on IoT devices increased by 13%, while research shows attacks were up 22% on the previous quarter. As the results of the IMC survey demonstrate, security is currently top of mind for IoT adopters and their concerns are not unfounded.”

"Processing IoT data at the edge: the right business decision"

In the below Q&A, Rob Milner, head of Connectivity at Cambridge Consultants, explores the importance of processing IoT data at the edge. Read here

Security is by far the biggest challenge to IoT deployments, according to 50% of the respondents.

The level of concern is reflected in an increasing interest in implementing additional IoT-specific security solutions to secure current IoT devices.

“IoT devices are notoriously difficult to secure because their basic interfaces cannot support simple network security features,” continued Stergioula. “However, robust IoT-specific security solutions, such as ours, offer organisations the assurance that their network and their devices are protected with the most advanced and scalable monitoring and threat detection tools. Security need not be a barrier to the adoption of IoT technology.”

As IoT adoption rates grow into a broader array of environments, the need to protect the edge of IoT grows in importance for organisations wanting to take advantage of the technology. Read here

But, what about at the edge?

Increasingly, organisations are processing IoT data at the edge — the boundary between the analogue circuitry interacting with the physical world and the digital circuitry performing the compute and machine learning workloads — and this must also be secured: edge security.

Stergioula told Information Age that while edge computing has many benefits, it also brings new challenges in IoT security. “Sending data over the public internet brings an inherent risk of it being corrupted or stolen. Processing data at the edge rather than a centralised cloud location means less data is exposed.”

“On the other hand, storing small packets of data across multiple edge computing nodes increases the attack surface. Once access is gained, a hacker could use this point of entry to infiltrate the rest of the network. Each node may only contain a small amount of data, but it’s still vital that it is protected.”

Protecting the edge of IoT requires a secured, trusted computing infrastructure that extends from IoT edge devices to the cloud and blockchain. And, within this, enterprises and manufacturers must be able to identify the device and inspect the data that is being transmitted.

Nicholas Ismail is Editor at Information Age.  He writes original articles for the magazine and website, interviewing business leaders both on and off-camera while providing analysis for IT and business leaders on the latest technology trends disrupting the industry.

Nicholas Ismail is Editor at Information Age.  He writes original articles for the magazine and website, interviewing business leaders both on and off-camera while providing analysis for IT and business leaders on the latest technology trends disrupting the industry. 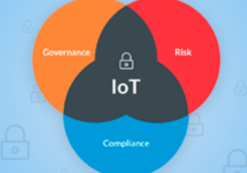 Risk Management and Compliance for IoT Solutions
The Fundamentals of IoT Solutions, Risk and Regulations.
Self-Paced
$70

The Fundamentals of IoT Solutions, Risk and Regulations.