Thinking of joining or investing in an AI startup? Here are 5 questions that cut through the noise

There’s been so much hype in recent months around opportunities in artificial intelligence that it’s starting to feel a bit like a second gold rush.

Just like in 1849, in 2017 there are a lot of people who want to get in on the AI action. And like the prospectors who came before them, they’ll be forced to sift through a lot of gravel to find gold.

You might be forgiven for dismissing the current rush to build companies around AI as another tech fad. But make no mistake, there’s real substance behind the hype. Advanced machine learning capabilities and massive specialized data sets combined with accessible, affordable computing power will inevitably change the way we work and play.

I’m a big believer in the potential for AI to transform the enterprise, and it forms the foundation of our thesis for investment in Coaching Networks . In pursuing this thesis, we’ve met numerous companies banging the AI drum, but only a few are actually delivering scalable, defensible AI-based solutions.

And that’s led me to wonder about ways to better separate the fool’s gold from the 24 karat prize. To that end, I’ve come up with a short list of questions that potential employees and investors can ask founders touting AI. They may also serve as a guide to help entrepreneurs better articulate their plans.

1. What specific problem are you solving?

In the pre-AI gold rush era, startup founders tended to describe their companies in terms of the customer problems they were solving. The AI hype wave has clouded this simple, yet critical, concept of company self-identity. Step one in evaluating any company is always understanding the problem they solve, and if an exciting business can be built solving it.

A good example of this is Textio, one of our portfolio companies. It uses AI to help companies write job posts that help fill open positions 20 percent faster. But it’s not an AI company. It’s an augmented writing company focused on improving recruiting outcomes. AI is simply a part of the technology it’s putting to use to solve an exciting business problem.

If you’re positioning your startup as an “AI company,” stop. In the same way you wouldn’t introduce yourself a Python company or an Apache company, you shouldn’t call yourself an AI company. However important AI is to what you’re doing, it’s just another part of your technology stack.

2. Who are you focused on solving it for?

Focus always matters in startup land, but it is particularly important (and frequently missing) in companies using AI. Here’s why: AI-based companies need a domain-specific dataset to generate useful insights.

Generic bot companies, with their horizontal data sets, have largely failed to live up to their hype because modeling a response to every question in the universe is nigh impossible. In contrast, companies like PrecisionLender, which offers a bot focused exclusively on helping commercial bankers price their loans, can deliver accurate insights to users because it was trained on a dataset focused on specific borrower scenarios.

The most common path to failure I've seen promising, AI-driven startups follow is using their technology to build custom analyses for their customers. While some successful companies have bootstrapped early data sets with this approach, doing custom analyses for too long results in a professional services firm, not a scalable software company.

The common reason startups head down this path is a lack of focus. It is practically impossible to productize AI without first narrowly defining the problem you're solving and who you’re solving it for. The poster child for this lack of focus in AI is IBM Watson. Despite untold sums of invested capital, IBM has been unable to productize Watson and has instead built the world’s most expensive consulting firm.

3. Where are you getting your proprietary data set?

Many entrepreneurs make the mistake of focusing on the uniqueness of their algorithms as their competitive differentiator. We think those founders are headed for commoditization, since many of the best ML frameworks will be provided by open source offerings like Google’s TensorFlow.

We believe that the long-term competitive moat in this next generation of software will come from proprietary data, and owning the user networks which generate them.

Thus, the best entrepreneurs in this new world will figure out a clever hack to kick start their flow of proprietary data. To get started, Textio, for example, tracked how long job postings stayed up on job boards to estimate the time required to fill roles with a given posting. This clever hack earned Textio’s team the right to approach potential clients with the rough beginnings of a recommendation engine that improved exponentially as those customers added their own rich data sets.

Once you’ve figured out that initial hack, the next step is to figure out how you’re going to own the user network that will generate data on an ongoing basis. Chorus.ai, a company which coaches sales reps on what to say while they’re talking to prospects, has access to all of a company’s sales reps, and every call they conduct with a potential customer. Every new user added to the network benefits every other user. As the network grows, so does the quality of the data, and thus the quality of the coaching outputs.

This network becomes even more powerful if it can be leveraged across the entire customer base. This means that with the proper level of abstraction, what a system learns from one customer can be leveraged to coach another. We believe these proprietary user-generated data networks will create the first Facebook-scale company in the enterprise.

4. How are you solving your customer’s problems?

Most “AI” companies I’ve spoken with aren’t actually deploying artificial intelligence. They are instead using rules-based engines, which are essentially glorified IF/THEN statements. Rules-based engines are valuable in many contexts, particularly in a product’s early days, but are manipulated by humans and therefore not scalable.

The most successful branch of AI in solving business problems today is supervised machine learning- a system that takes labeled inputs and generates outputs in an automated learning loop. Over time, the quality of the output improves by tracking input/output pairs across a variety of contexts.

A simple way to start to understand if a startup is using true AI is to ask what these input/output pairs are. If the entrepreneur can’t articulate them clearly, there probably isn’t AI under the hood.

Another way to dig in: Ask a customer if their results are getting better over time. If they are, and you’ve confirmed there’s an automated learning loop in place, your chance of striking gold is much higher.

5. Who is building your solution?

Hiring well in AI is more of a challenge than in other fields. For one thing, the gold rush has caused a spike in demand. For another, experienced talent is in short supply because the data science function in business is so new.

As such, many AI teams are made up of folks recruited directly from academia. While we’ve talked to a lot of truly impressive scholars who’ve pushed the boundaries of AI and ML theory, most teams lack meaningful experience applying those theories in the real world.

Sometimes a university researcher can lead a company down a more expensive and complicated path toward building a business. The best people to recruit will be the ones who best understand the business problem you’re trying to solve, and the best approaches to solving it. As such, relevant domain expertise is helpful in addition to hard data science skills (our friends at Zetta do a nice job of laying out a path to attract domain experts).

On a related note, it’s important to ensure that the data science and engineering teams communicate seamlessly. Some of the best teams we’ve seen include a few “interstitial” members who are familiar with both worlds, and who can bridge the technical, cultural, and practical gaps between them.

If after asking these questions you get satisfying answers, congratulations! You may have struck gold. But now the real work of mining it begins.

Jake Saper is a Principal with Emergence Capital and a Kauffman Fellow, and also serves as a Board Observer at Comfy, DroneDeploy, Guru, Textio, and Augmedix. He leads Emergence’s Natural Resources Cloud practice and is passionate about bringing the benefits of the cloud to industries operating in the physical environment. He’s also excited about the role machine learning will play in improving how we work.

Jake Saper is a Principal with Emergence Capital and a Kauffman Fellow, and also serves as a Board Observer at Comfy, DroneDeploy, Guru, Textio, and Augmedix. He leads Emergence’s Natural Resources Cloud practice and is passionate about bringing the benefits of the cloud to industries operating in the physical environment. He’s also excited about the role machine learning will play in improving how we work. 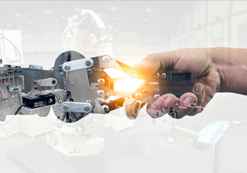 Learn the elements of a robust IIoT control system through applications.