From his vantage point as someone who evolved from a collector of enormous amounts of data to a wise decision-maker at high levels of business and government, few are more qualified than Vince Barabba to offer guidance on how to bridge the chasm that too often separates big data and wise decisions.

As I discussed in the first part of this series, Barabba’s new book, Wise Decision Making: Through the Systemic Use of Knowledge and Imagination (his sixth book), explores how all participants in a decision process can (and must) work better as a team. Success depends on not just great data but also on how well the enterprise coordinates its efforts to realize benefits that are greater than the sum of individual contributions.

Here are a few key lessons I drew from Wise Decision Making:

1. Get behind the curtain.

Behind every enterprise are people who actually design and make things, and who ultimately translate market intelligence into products. These are the people who create value — everyone else just shuffles it around. When Barabba led market research at Kodak, it was the group of chemists and scientist who knew what could and could not be done with film chemistry. At General Motors, where he led strategy development, it was the engineers who could translate customer feedback into engineering design requirements. Who are the wizards behind the curtain in your organization?

If you’re in the business of collecting and leveraging data, make sure that you’re partnering directly with the scientists, engineers, designers and others who can use it. The enterprise needs data infused with their knowledge and imagination to improve products and services. Otherwise, the models built and the data collected might be worthless.

(This challenge is consistent with what Tom Warden, an expert on the use of big data in insurance, described to me as one of the biggest mistakes his industry: “too often, data scientists are clueless about how the business makes money.”)

2. Understand the operating design of your enterprise.

Alan Kay’s dictum that “Context is worth 80 IQ points” is especially relevant for wise decision making. One of the most important dimensions of context is what Barabba calls the “operating design” of the enterprise. As depicted in the following figure, there are a range of possible operating designs.

Does the enterprise operate in an environment characterized by relatively slow and evolutionary change, for example? That puts it in a “make and sell” operating model where success depends on economies of scale and correctly predicting demand. The auto business, for example, was once a prime example of the make-and-sell operating design.

Or, to illustrate the other end of the spectrum, does the enterprise operate in a very complex and uncertain environment with imminent disruptive opportunities and challenges due to technology, regulation, demographics, etc.? Success in these circumstances requires an “anticipate and lead” operating design where the enterprise needs to reinvent itself, based on both customer’s articulated and unarticulated needs, and lead customers there. Success in the future auto business, given the potential of connected, electric and/or autonomous vehicles and millennials’ changing attitudes towards car ownership, depends on the anticipate-and-lead operating design.

Remember that no model can accurately capture the complexity of a real situation and, therefore, can never provide definitive answers. Wise decision making depends on analyzing and interpreting model results into valid conclusions.

4. Make sure those who will implement the plan are involved in developing the strategy.

How many times have you seen talented strategy teams work hard to develop good plans, and then present them to a management team that was too experienced and comfortable in the old ways of doing things? “Too many,” notes Barabba, with the result that many strategic plans end up not being implemented. The way to avoid this outcome is to reengineer the strategy making process.

Strategy teams should not make plans; instead, they should guide the process that engages those responsible for reaching a strategy, allocating resources and implementing the associated course of action. Otherwise, it will never be their strategy—no matter how good. The strategy team’s job is to provide the relevant information, track underlying assumptions and ensure progress.

In Billion Dollar Lessons, Paul Carroll and I documented how numerous strategic failures might have been averted if the principals had followed the simple rule of making core assumptions explicit and knowing when those assumptions had changed. Barabba vividly illustrates how this happened for Kodak.

In the mid 1980s, Kodak's market researchers, led by Barabba, rightly determined that digital photography could not compete with film on a number of key dimensions, including quality, cost, and ease of use. Their research traced those findings to specific technological factors and forecasted when and how those factors might change.

Unfortunately, those findings guided Kodak strategy for decades—long Barabba had left and long after the underlying factors were no longer true. Kodak never closed the loop.

In Wise Decision Making, Barabba extensively illustrates the virtues of closing the loop—and the downside of not doing so. He offers tools and examples about how to do it.

He also shows how closing the loop is not enough. Instead, he argues for the power of what Harvard’s Chris Argyris has come to call “double loop learning.” Closing the loop is critical but only helps to detect and correct errors for the strategy in question. It doesn’t help transfer learning across the organization.

Double-loop learning encourages and helps the entire enterprise learn to actively question and modify existing values, norms, processes, policies and objectives. It is a concept that is very compatible with Doug Engelbart’s ABC’s of Innovation, which I’ve previously discussed. It is the key to creating a learning organization.

Perhaps the wisest element of Vince Barabba’s Wise Decision Making is that the author doesn’t claim to have a recipe for wise decision making. Instead, he urges readers to learn from his experiences and then reinvent his tools and frameworks to fit their unique circumstances. These five lessons are the ones that spoke to me; your opportunity is to find the ones most relevant to you.

Chunka Mui is a futurist, keynote speaker, innovation advisor and best-selling author of four books on technology and innovation. He is also the managing director of the Devil’s Advocate Group, a consulting group that helps organizations stress test their innovation strategies. He is a regular contributor to Forbes and strategy+business and has published in numerous premier outlets including the Harvard Business Review and Technology Review.

Chunka Mui is a futurist, keynote speaker, innovation advisor and best-selling author of four books on technology and innovation. He is also the managing director of the Devil’s Advocate Group, a consulting group that helps organizations stress test their innovation strategies. He is a regular contributor to Forbes and strategy+business and has published in numerous premier outlets including the Harvard Business Review and Technology Review. 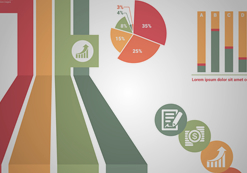 Learn the art and science of telling compelling visual communications with data.